I’ve been looking through a bunch of books on Land Art and Place, some are from the library, and some are mine from home.

There were a fair few artists listed across the books, obviously, but I’ve only noted down the artists and/or art that I think are interesting, for better or worse. I’m not sure there’s much point showing which work I found in what book, so instead I’m going to list by artist (in no particular order). Some images were represented in the books, some caught my eye whilst looking for other images, some artists had their names mentioned but no examples given.

I like the tactile and sensory nature of this work, and of showcasing what nature does naturally. I’m not so fussed on the photography work, but the rest of it is lovely and is in line with the type of work

There’s something here around ritual, myths and archetypes which I’m really attracted to. As much as I love the foraging nature of Medicine Wheel, I do feel highly critical of  it, because a British artist has blatently appropriated Native American culture for his own gain. As fascinating as I am by indigenous teaching that is not from my own ancestry, I don’t ever want to appropriate like this. Inspired, yes. Using direct reference, no.

I hate his stuff, controversial I know. It feels very decorative and empty to me. Even after learning that he’s interested in decay and entropy, I still find his work conceptually lazy and just a bit shit to be honest. I think what I dislike so much is it’s ‘prettiness’ in conjunction with an obvious ‘human hand’? It screams this idea that nature is only be beautiful after human intervention, after a person has rearranged things (read: controlled nature) in a human-centric pleasing way. This is no different than a manicured garden, in my opinion. I do, however, very much appreciate that he uses only what he finds on-site (even when it comes to affixing things), and that the work has a temporary nature.

I find this work interesting. There’s something about creating a framework for showcasing the adaptability and change of nature.

Mud-painting? I wanna have a go! Sometimes it’s about taking childhood processes and scaling them up then? Richard Long is another overrated artist in my honest opinion. I get it, I get the thing about walking, and line and experience… all of it. I suppose I just don’t find the translation of that that interesting. 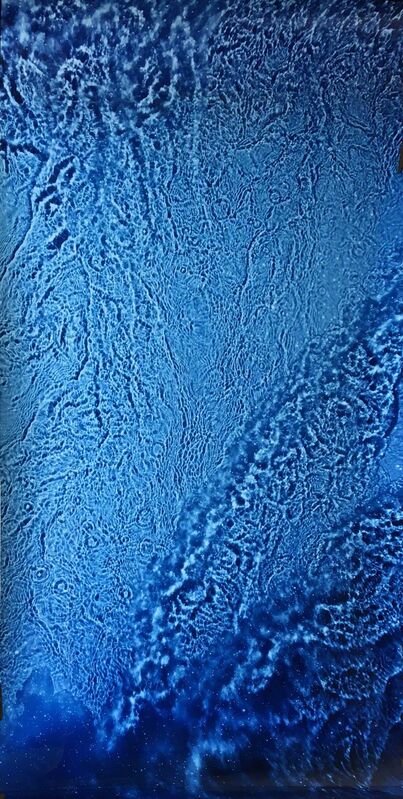 The imagery isn’t that interesting to me, but the process of it is. She submerged photographic paper underwater at night and flashed it with light to make these images. There’s something I like here about capturing a moment in time.

Although I don’t much rate the Seaskape, there’s something interesting there about plonking a thing in a place and letting nature do what it wants to do with it.

Interesting, but not that interestingly executed. Although I love how this almost becomes a small amphitheater, or at the very least, a lovely communal area for people to sit and be with each other in.

Feels like a cousin to my seed papers, but suggests to me that perhaps I could use stencils to get a cleaner effect?

Showcasing the elements by providing spaces for them to do their thing. Yes, I love it.

I LOVE this, and I love her. It’s beautiful, meaningful, has a clear activist message and provided food and nature for inner city inhabitants. And its gardening <3

A forest as an canvas, in which people can explore the space in whatever way they want. Yes, that’s lovely. If I could afford a patch of woodland, I’d have such amazing plans for it.

Interesting process (uses magnifying glasses to focus sun onto woods) and I admire his patience. I don’t have much else to say, but it’s the only artist I’ve come across so far who harnesses the sun in their work.

As a rule, I generally like Udo’s work. Udo seems to be inextricably linked to Goldsworthy because both their work is very pretty and is about rearranging things in nature… but Udo’s has a different flavour that I like a lot more. For starters, it seems much more responsive to and celebratory of the site, which I like. Secondly, even the aesthetically pretty, Goldsworthy-esque, obviously-human interventions (such as the nest sculptures pictured) generally have a dual (probably unintended) purpose of actually being able to support wildlife. Which, since I have a strong sense of not fiddling whilst Rome burns, is important to me and something I hope to do if I work outside.

I don’t find this that interesting in all honesty, more highlighting just to remind myself what’s possible with turf-working.

I do like this, although I have a huge sense of empathy for this tree because of how displaced it seems. Not only is it inside an unnatural space, it’s very much alone. That’s not me projecting or anthromorphising either – plants need diversity and ‘company’ to thrive. I also find it aesthetically art-wankery – it’s probably the cube that does that?

There’s something here that makes me feel really uneasy, but this is a reminder of how one could work with earth. I’d much prefer to see this teeming with wildflowers though – it’d look infinitely better and better support wildlife.

Hate hate HATE this kind of Land Art. It’s extractivist and aggressive, exploitative and industrial, singing to Capitalist sensibilities that is in direct, active opposition to environmental care and conservation. I understand it might be a commentary on anti-environmentalism, but understanding the context of American Land Art and how this work has been framed in books, makes me think that it’s not. It’s literally seems to be a celebration of scarring the Earth.

Alongside Charles Simonds’ ‘Birth, 1970’, I’ve realised that not interested in this sort of Land:Body Art. Although this work really makes me laugh! I get what they’re communicating, but it brings attention to the human in the piece, not the environment.

This is a bit cringey for me, although I know this is exactly the type of figurative thing that mass audiences would go wild for. It has the capacity to support life, but lacks depth. Again, this is more of a reminder to me that Earth can be sculpted and covered in turf.

This is really interesting, using turf in this way to take over human spaces. It has a strong clear message, but I am highly critical of the use of turf as grass is INCREDIBLY water inefficient.

I like Websters work. Indoor gardening. House-plant artist! There’s much more interesting older work that I can’t find images online of where she recreates mini habitats (e.g. wetlands). A reminder that I can use gardening as an art form!

Poet-artist who uses words to respond to place. I don’t like his stuff aesthetically, but as someone who uses writing as an increasingly important part of her practice, it’s good to bear in mind that I could use words, or even just letters, in my work. This reminds me of David Abrams though – in Spell of the Sensuous he argues that humans distanced themselves more from nature with the invention of written language… so is using words (which is essentially a short-hand for understanding) a distancing of self/experience with nature? Or could words be used to reconnect with nature?

The Life of Mountains

I appreciate that his work is all about his direct experience of nature and the artistic outcome isn’t everything – which I love and relate to – but the work just isn’t that interesting to me. Concept, yes. Documentation/artwork, lacking. Think this is telling me that I need something more than just core basic details if communicating an experience.

Yeah, it’s cool.  Not sure what else to say, to be honest.

I like that Penone takes a spirit of collaboration in his work – I really relate to him in that way. But how he translates this sentiment just seems to me like he’s took something natural and did something cliche with it. And then some of his most famous work, like the Tree Hands, I find horrible. It literally translates to me as the ‘hand that man has over nature’. I don’t know, there’s a disconnect between the way he reportedly thinks about collaboration and then what that ends up being.

I love collage – there’s always something so joyful and accessible about it. This could be something I try out for myself as a nice thing to do, see if new connections are made.

General thoughts from going through