The Critical Fish opens up conversation about the arts 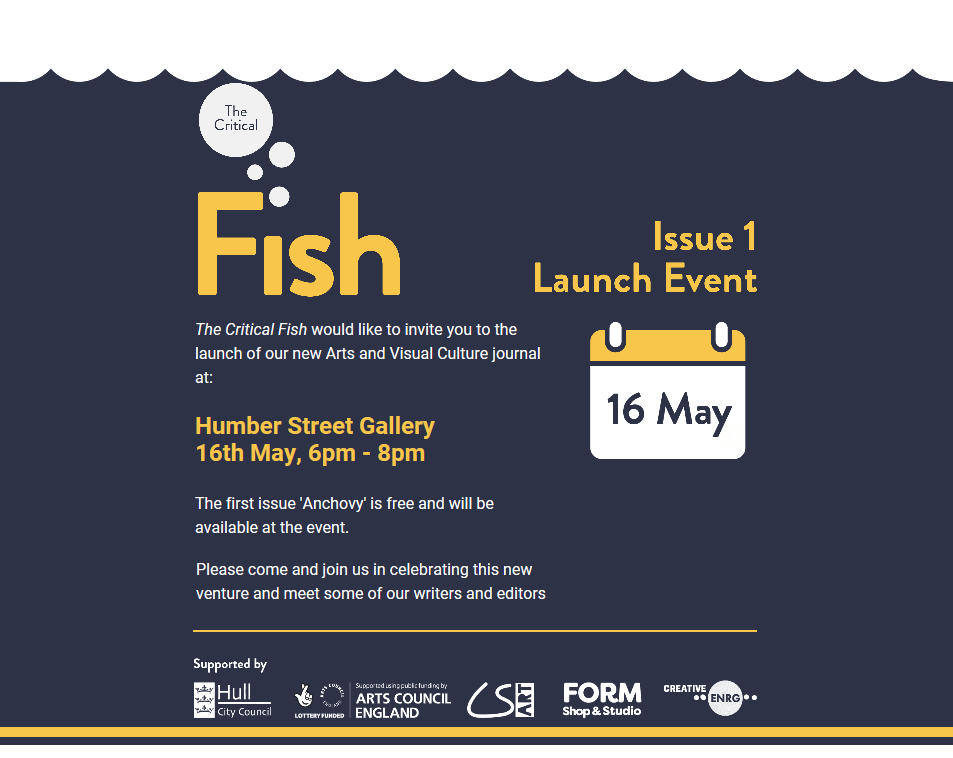 To empower the growing art scene in Hull, East Riding and beyond, a new artist-led journal is launching to support conversation and debate about art and visual culture in the city and beyond. The Critical Fish is a new collaborative and inclusive forum that seeks to connect artists, writers, organisations and broad audiences.

Produced by local artist Lauren Saunders and writer/educator Jill Howitt after recognising the need to continue the conversations initiated by UK City of Culture 2017, Fish centres on Hull and the region but is outward facing, inviting contributions from further afield. Since receiving funding in Autumn 2018, over a hundred people from the region, across the country and internationally have already contributed to getting this participatory project off the ground.

Looking to break down some of the traditional barriers that prevent people from thinking about and enjoying art, Fish invites people to reflect on their own experiences and topics of interest with a critical eye. Discussions around the key themes of accessibility and criticality are explored in a free publication, which will be made available in the coming weeks.

Packed full of essays, real/imagined conversations, poems and artworks, the 72 page journal highlights the work of local, regional, national and international artists and writers at different stages of their careers. This includes a discussion with Sean McAllister (the filmmaker behind A Northern Soul) on his methods and influences and an article about the 50th anniversary of the iconic film Get Carter. With each issue comes an original print; Joseph Cox, the designer behind The Critical Fish, Humber Street Sesh and the ‘Our City of Culture’ bid, is providing the first collectable artwork. Jill Howitt states, ‘in this first issue you will find strong opinions, pressing issues, playful and experimental writing, and beautiful images and design’.

Inspired by Gordon Young’s Fish Trail (1992), the first issue is titled Anchovy; to reflect the idea of looking beneath the surface, to reference Hull’s heritage and to echo some of the intricate and playful ways that Young guides the viewer around new and familiar places. Anchovy has been funded by Hull City Arts and Arts Council England and supported by a number of local and regional arts and cultural organisations.

Speaking about the new journal, Lauren Saunders commented: ‘We are so excited by the opportunity to spark these sorts of conversations, especially between people who make and write about art and those who maybe feel that art isn’t for them. We’re thrilled by the response and support we’ve had from people and organisations alike, confirming our belief that we need an accessible forum to discuss, review and promote arts and visual culture in the region. I’m looking forward to seeing how the community participates in shaping, developing and contributing to this project in future.’

Fish are releasing the flagship Anchovy issue at a free-to-attend launch event between 6pm and 8pm at Humber Street Gallery on Thursday 16 May 2019. As part of this much anticipated event, poet Mary Aherne will also be performing a reading of her submission to The Critical Fish.

Attendees will be able to meet the contributors and receive a free copy of the publication prior to general print and online distribution. From Friday 17 May 2019, the journal will be published at www.thecriticalfish.co.uk and free copies will be made available at various arts and community venues across Hull and East Riding.